Are you better off?

Maybe these stupid say-nothing cowardly dems can't say it, but I can:

YES. I am better off today than I was four years ago.

--Four years ago, I was being denied a car loan, despite my high credit score, little knowing that within a few days the markets would crash and we'd teeter on the brink of another Great Depression.

--Three years ago, I was trying to find a job in a California where unemployment was over 13 percent; I couldn't stay out there and had to move back from the land of dreams I always thought California would be.

--Today, I'm better off -- and feeling better now about life -- than I was back when we were all still reeling from eight years of Chimpy's dick-tater-shit.

Things aren't perfect, but when I think about the possibility of seeing Roe v. Wade overturned, seeing my chances of marrying my partner disappear, and watching a new theocracy take over and likely follow Israel into war against Iran and anyone else brown and muslim, I know that even if I were swallowing sand in the desert and Romney offered me a glass of water (which would, given who he is, be a glass of piss), I'd STILL vote for Obama over Romney. 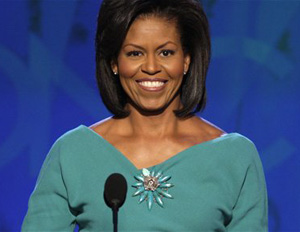 No contest: Michelle actually sounds human and real. Like she's speaking off the top of her head. Unlike the creepy "I love you, women!" (shudder) train wreck of Ann Romney's robotic "humanizing" of her husband.
Posted by dguzman at 7:54 PM No comments:

One of the biggest differences I've noticed between the dems' convention and the repubs' convention is that the speakers tonight have been talking about President Obama, not themselves.

One of the biggest differences between this year's dem convention and past ones is that these dems aren't afraid to say President Obama is pro-choice, pro-gay rights, pro-women, and pro-gressive. It's about time.

No speeches to empty chairs by crazy old guys who used to be cool.

No self-centered assholes spending three-quarters of their time talking about themselves.

No strings of outright lies.

I may not be an ardent Obama supporter, but I'd support just about ANY democrat over Romney and Ryan. I don't want drone wars, or any wars.  But I REALLY don't want to see the end of reproductive rights, the continuation of the war-theocracy state that Bush II started, a renewed campaign of tax cuts for the super-wealthy, or an affirmation of the racist and classist hatred of the 99% that Romney/Ryan espouse.
Posted by dguzman at 7:14 PM 1 comment: