It's final: I'm writing in Kucinich

Whether it's ordering drone attacks all over the Middle East and Pakistan and killing indiscriminately, or sending death squads to kill bin Laden, or keeping an attorney general who's possibly been caught perjuring himself in front of Congress -- Obama is doing nothing to earn my vote.

I realize that he's had to fight an uphill battle to do anything to help the economy or any of us 99%ers, thanks to a determined repug strategy to defeat pretty much every little thing Obama wants to do. They just want to make him look bad and keep the power in their own hands; I understand that.

But he's doing plenty all on his own to make me feel like maybe we SHOULD let a repug take over. This whole troop withdrawal thing is nothing but smoke and mirrors; he'll pull the fighting men and women out and send in the "advisors" and the "trainers" and every other contractor who wants to earn mad money for risking life and limb and blowing away a few random Iraqis. There's no way the Pentagon lets go of their little toys in the Middle East.

God knows the repugs are not going to do any better, as they have no ideas and no consideration for anyone but themselves. Still, it's hard to see how things could get much worse, as I commented on I Can't Believe It's Not a Democracy after reading GMB's comment about letting the repugs take this shit over for a while and see how they like it.

This idea intrigued me; think how little Mittens or (oh gees) Herman Cain (as if) could do to right this ship. It couldn't be any worse than the little that Obama's done, thanks to the repugs blocking his every move, could it?

So while I had been thinking that I would have to hold my nose and vote Obama, I'm starting to wonder if maybe I should just write in Kucinich (aka "waste" my vote) and be done with it.
Posted by dguzman at 7:14 PM 3 comments:

The ecstacy and the agony

With apologies to Irving Stone. But not to Charleton Heston, because he's a dick. 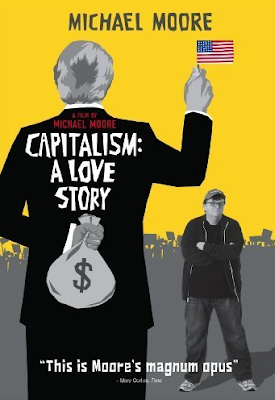 Though it's not a recent film, I only just watched Michael Moore's Capitalism: A Love Story. If you haven't seen it, I suggest you do; it's a sharp and insightful piece, and it reminded me of the beginnings of the financial crisis and how perfectly executed was the complete sellout of the American people by our government, leading up to the bailout in the waning days of Chimpy's administration. In light of what's happening now with the Occupy movement, this film is more relevant than ever.

Still, there's one section--on the uprising of the people that led to Obama's victory--that stirred memories of one of the happiest nights of my life, as well as brought up a bitter reflux of betrayal. Moore chronicled the almost complete buyout of Congress and the administration by Goldman-Sachs execs (Paulsen, Geithner), senators who got loans from Countrywide (Dodd) before they crashed and burned, the fear-mongering that forced the passing of the TARP bailout -- but a lot of those people stayed in Obama's cabinet. Obama, whose top campaign contributor was Goldman Sachs, ended up being their bitch -- the very thing we elected him NOT to do. I watched the joy on people's faces as they watched Obama's rise, and I remembered the many many many times Obama has furthered the Bush-Cheney administration's many corrupt aims.

As I said, Moore didn't spend too much time on Obama; at the time Moore was making the movie (2007-2008, released in 2009), Obama was just starting to gain traction as a man for change, a man who was http://www.blogger.com/img/blank.giffor the people -- in short, a http://www.blogger.com/img/blank.gifsocialist. I was glad Moore didn't spend much time making Obama into the savior of the people, or he would've had to make a whole other movie just to eat his words.

Watch this movie sometime; it'll remind you of just how corrupt most of Washington is and how it got that way.

P.S.--the movie also brings up the subject of companies purchasing life insurance policies on their employees and how they profit when those employees die. Check to see if your employer is on this list. Gotta tell you that I breathed a sigh of relief that my current employer isn't on the list.
Posted by dguzman at 9:26 PM 2 comments: