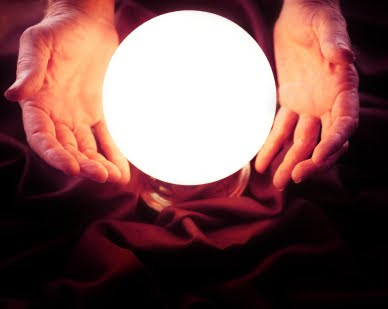 Feeling a little future-y tonight, so why not make some predictions?

1. All these currently insured people bitching about the health care bill, claiming it's going to hurt them in all kinds of crazy ways, will find out that not much is going to change for them (unless they lose their jobs).

2. All us uninsured people are going to be able to afford to go to the doctor when we're really sick.

3. Pope Prada isn't going to get in any kind of trouble, nor is he in danger of losing his job, no matter what revelations surface about his part in child-molesting-priest cover-ups.

4. What the hell--Cowboys to the NFC division title game, where they'll lose.

5. The Lady Bears of Baylor will win the NCAA national title. They've got heart.

Anything to add?
Posted by dguzman at 5:55 PM 7 comments:

So bring on the healthcare! 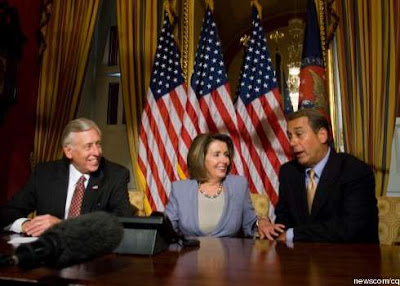 Hoyer, Pelosi, and the Boner
Imagine a country where artists, freelancers, the unemployed -- in short, any citizen -- can have health coverage. They don't have to go the emergency room to get healthcare; they will be able to pay a certain amount (helped by the government, in the case of non-super-rich people) and be guaranteed healthcare. And yeah, it's kind-of a drag that this healthcare can't just be free, but then again, when the country has a deficit that's fast approaching thirteen TRILLION dollars, then hey -- I'm willing to help out and chip in for my healthcare, you know?

Imagine a country where a presidential candidate says he's going to get something done -- something that will prove to be the centerpiece of his presidency -- and he gets it done.

Obama's centerpiece? Healthcare for us all.

And while the Patriot Act, which clearly violated many of the freedoms guaranteed to us by our Constitution, is still around, the healthcare reform legislation hasn't even been signed into law yet and already, Texas, Pennsylvania, South Carolina, both Dakotas, Florida, Virginia, Washington, Utah, Nebraska, and Alabama (so far) will be filing a lawsuit challenging the constitutionality of, as an attorney claimed today on NPR, "taxing" U.S. citizens for just "living" by requiring people to pay a little for healthcare. The Virginia AG claims, "'If a person decides not to buy health insurance, that person by definition is not engaging in commerce.... If you are not engaging in commerce, how can the federal government regulate you?"' Uh, what?

Oh, and don't forget every idiot's favorite constitutionality argument, "state's rights." Those are also being infringed on, dammit, according to the more wacko AGs out there. Right.
Posted by dguzman at 6:29 PM 7 comments: 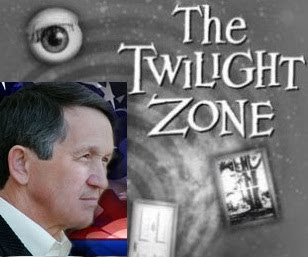 You're traveling through another dimension -- a dimension not only of sight and sound but of mind. A journey into a wondrous land whose boundaries are that of imagination. That's a signpost up ahead: your next stop: the Kucinich Zone!

Let's imagine the wondrous land, the amazing dimension of sight and sound and mind that we'd have if Dennis Kucinich (D-Awesomeness) were in charge.

1. No more war. Kucinich has been trying to stop the money-pit wars in the Middle East since they began. Does anyone listen? Nope. But think how much more money--and how many fewer dead soldiers, Iraqis, and Afghanis--we'd have on our hands if we'd never gone to Iraq or Afghanistan. Kucinich just proposed stopping additional funding for the Afghanistan war and bringing our troops home by the end of the year. Predictably, it failed. But without Kucinich, would anyone in Washington even be talking about an end to this insanity?

2. Single-payer option national health care. Does anyone in the House believe in fighting for us besides Kucinich?

5. No bailouts for billionaires.

6. Cheney impeached. Oh sweet jeebus, the words are like music.