I'm still alive, though I haven't posted for a while. I've been getting into my new job at MegaCorporationInc, and I'm in Harrisburg all week at a sales training class. But I'm still here.

Like many of you, I've tired of the crap they call "news" on TV and radio, so I haven't been much in the loop on what's happening in the big world. I've kept my focus local of late, on settling back in Pennsylvania after my long time away, on integrating my stuff into the apartment I'm sharing with AB, on learning to live with someone again after a while on my own. It's been great living with AB, who's just plain dreamy in every way! I miss my parents and my family, but I'm so glad to be back in PA.

I'll leave you with this pre-adolescent school picture of me in fourth grade; I kinda missed that little recent trend on Facebook where everyone was using school pics as their profile pics. Oh well. Better late than never: 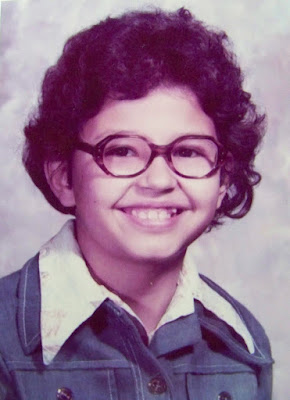 The mirror has two faces

I mean the way regular people like you and me, and the people all around us at work and the grocery store and places, talk about political figures we don't like.

Remember how, during the GWBush presidency, we all talked about him like he was a dictator, a Hitler who was taking away our rights? And the Patriot Act was the end of our country as we knew it? I won't bother with links; we all remember our posts. We believed we were right, and that we knew what repugs and Faux Nooz and Rush Limpdick and Glenn Prick didn't know: that Bush was basically the antichrist, and we were in big trouble.

Over the last week and a half, I've been temping at a local car dealership, answering the phones and filing and stuff. During this time, I've heard almost the exact same things, word for word, that we used to say about Bush -- only this time, these guys are saying it about Obama. They really think they're right. People who seemed sensible only moments before suddenly start saying things like "Obama is exactly like Hitler!" and "this healthcare bill is the end of our democracy!" "Obama's the antichrist!" 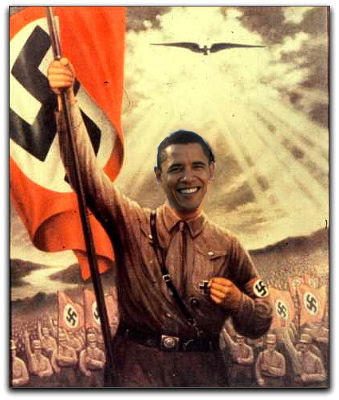 These people list things like "parallels" between Hitler's Third Reich and Obama's presidency (stuff about their talent as public speakers, the takeover of businesses by the government, etc.); you've heard it all on Faux Nooz. The thing is, they all believe they're right too, just like we do. They all think they know the truth, and that the other side is completely wrong and full of idiots, and that NOW we're all screwed because this crazy guy in office is taking our country straight to the gulag or the concentration camp or whatever.

A lot has changed since Bush took office in 2000. But are we in nazi Germany? It doesn't feel like it; no one's coming for my neighbor yet, or for me. All our bloggy jokes about getting picked up and put in Gitmo for trashing Bush/Cheney? Never happened, at least not to any of us.

Who's right? Who's wrong? Do any of us really know what's happening in D.C.? Do we have any control over what happens in D.C., or Afghanistan or Iraq or anyplace outside our own homes and jobs? Is our government even our government anymore? I mean, one minute Chimpy McStagger is signing blank checks to Halliburton for providing our soldiers with contaminated drinking water; the next minute, the Carebear is allowing offshore drilling pretty much everywhere.

Sometimes you just have to say WHAT THE FUCK?, you know?

I've thought before that our government/power elite exist in their own world, completely insulated from the everyday, the mundane concerns you and I live with. Our media is part of their world; they prop up Bush and his wars, give pub to morons like Sarah Palin and the teabaggers, let insane sociopaths like Glenn Prick or Rush Limpdick air their verbal poison.

We--you and me and all our neighbors--are simply the entertainment in this world. That powerful elite populace, all 1% of them, just point and laugh. And can you blame them? Look at the way we're portrayed on TV, on shows like Cops, American Idol, World's Dumbest, 19 Kids and Counting, Faux Nooz's entire schedule. Notice a trend there?

I'm reminded of an Ani DiFranco lyric from her song "Tamburitza Lingua":

TV is, after all, the modern-day Roman Coliseum
Human devastation as mass entertainment
And now millions sit jeering
Collectively cheering
The bloodthirsty hierarchy of the patriarchal arrangement

The power elite are sitting in those seats, making "thumbs down" gestures when it comes to doing anything that might help us get out of there alive. They'd rather we get eaten by the lions, or better yet, that we kill each other.

Who's right? Who's wrong? Does it even matter? Is our innate stupidity and need to put down that which is different from us so powerful that, no matter what side we're on, we're still singing the same songs but just substituting different nouns in the "I hate __________" spots? Are we any different from them?