What the hell is this about?

I have from time to time found myself asking, "What the hell?" when I listen to the news as so many of the repugs' moves make no sense whatsoever. Here's a recent list:

1. What the hell is the repugs' blocking of re-signing the START treaty about? Why would they not want to sign a treaty that was first proposed and signed by their own GHW Bush, especially when it limits the number of nukes other countries like Russia can build to aim at us? (Not that they're even bothering with trying to blow us up anymore--why bother?)

2. What the hell is the Israelis' refusal to stop building on other people's land about? Let's say for the sake of saying that Iranians sneaked across Jordan and starting building "settlements" in Israel. The Israelis would nuke Iran so fucking fast we wouldn't even have time to say "What the hell?" Yet the Israelis feel they can build their "settlements" wherever the fuck they want to, no matter whether the land's ownership is truly decided or not. And for this, the whole "peace in the Middle East" thing fails yet again. If only some Palestinians could secretly rent some of these apartment and homes right out from under the Israelis. But I suppose that's probably impossible.

3. What the hell is this new "Inside the State Department" show about? Have you seen it yet? Exclusive interviews with and following around of Hillary Clinton waxing philosophical about her role as Sec of State, blah blah blah. Why would she be doing this show now? Is this some kind of PR exposure for a possible run for VP or even President? Not that I wouldn't vote for her, but -- this seems weird.
Posted by dguzman at 2:33 PM 4 comments:

Be careful what you wish for 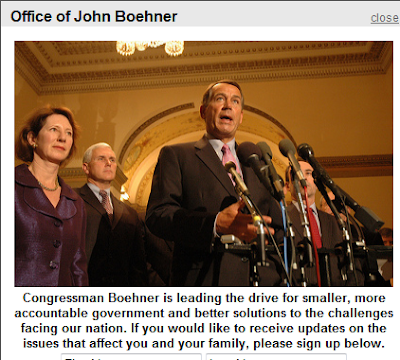 It's tempting to sign up for these "updates," isn't it?
So the repugs got what they wished for--the House--though they didn't get the Senate. Their super-way-out freaks (Angle, O'Donnell, Buck) did not win, thankfully. But Rand Paul and a lot of others did. Pennsylvania, a state that had gone blue in the last three presidential elections, now has shiny new repug governor, lt. governor, and senator.

And now we can see what the repugs do with their new-found (newly bought?) power. The Bronze Boner will take Nancy Pelosi's chair, and may the full-court press of "HELL, NO!" continue!

I'm curious to see whether they'll actually get anything done, whether it's their ridiculously vague Compact with America or Treaty with America or whatever they called it or something more radical. It's pretty easy to just say NO all the time, instead of coming up with ideas of their own, but then that's never slowed them down before.

Note: Many people are predicting the repugs will start working toward impeachment as soon as they can--anything they can do to tarnish and weaken the president even further. It's not like they need to use facts, after all -- amplified lies have been their stock in trade since Faux Nooz's first broadcast day.

It looks like they'll be crawling up the administration's ass to ensure nothing happens during the next two years, so don't expect anything productive to come out the government anytime soon.
Posted by dguzman at 6:22 PM 4 comments: