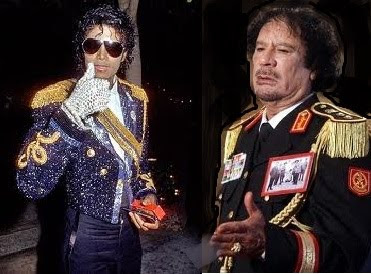 potential story for Matty Boy's tabloid blog,
headlined "Gadaffi and Jacko join forces for Victory tour!"
How much longer before Gadaffi (how many different ways can you spell it?) either offs himself in a big martyr-style fashion or is just pushed out and runs away to some undisclosed location?

I give him another week, tops. Then he's going to either go nuts and kill himself (and probably his whole family -- the guy's nuts), or he's going to just sneak out of the country and turn up someplace else.
Posted by dguzman at 7:54 PM 6 comments:

I heard one of the guys on Stephanie Miller's show the other day saying that no one seems to have noticed the possible connection between President Obama's strategy on the Middle East (the whole "we are not your enemy" approach) and the emergence of rebellions and protests in Egypt, Libya, and Tunisia. He thought that maybe Chimpy's "bomb them into democracies" policy didn't exactly create a climate conducive to revolution, while maybe Obama's relative hands-off policy might.

Of course, this assumes that Obama HAS a hands-off policy. He has continued the war in Afghanistan and we're not exactly out of Iraq yet either. Still, I do wonder if maybe the protesters at least feel that Obama won't rush to bomb the fuck out of them to defend old dictators in the name of "stability" or whatever.

He also mentioned the excellent point that, were Obama to offer any kind of tangible more-than-just-kind-words assistance to the protesters, the loyalists would seize on that support as evidence that the entire protest is simply an American-backed destabilization effort.

I'm not exactly up on Obama's foreign policy, as I kinda feel like he doesn't really seem to have one (other than continue wars, don't piss anyone off, don't make any bold moves), so I ask those of you who know more than I do: what role do you think Obama's different approach to the Middle East has played in the current climate of rebellion there?
Posted by dguzman at 6:19 PM 7 comments:

Random thoughts on protest and Egypt

I'm really liking that protest fever is spreading, from Tunisia to Egypt to Wisconsin! I have been asking myself often lately whether a mass protest in DC could ever topple our government, or even make a whit of difference. Of course, we've HAD mass protests in DC and they've never made a difference; think of all those gay rights marches and peace protests.

But really, could US leadership ever be destabilized by anything its citizens might do in terms of protest? I don't think so, mainly because of the set-up of this country. It's too big, too diffuse -- I could maybe imagine that a big protest in Rhode Island, say against their governor, might have some effect. And I'm only using RI as an example because it's tiny, but picture this: let's say that the governor of RI gets into some big sex scandal or something. He gets caught stealing money right out of the state treasury or whatever. So tons of people (well, at least as many people as they have in Rhode Island) march down to (what the hell is their capital?) Providence (?) and start protesting, yelling "throw da bum out!" or whatever. I can see this having an effect; the governor, knowing he's been caught, might resign. It's a small state, and the crime was clear, and things could fall apart.

But let's say people in the US got fed up--for some of the same reasons the people in Egypt got fed up, like no jobs, a government that wasn't listening, corruption, etc. And god knows the corruption and not-listening in our government are pretty extreme. Still -- could any protest be mustered that would cause our president (or even a congressman or anyone in power) to step down? Would enough Americans unite? Where would they protest, to have maximum effect? If there were, say, protests in every state capitol, would that do it?

I think our government is pretty much downright insulated from anything that we normal humans outside the Beltway do, whether it's protest or suffering or joblessness or every other ill we deal with every day. Our American Revolution already happened, and it will never happen again, no matter how rotten-to-the-core and completely corrupt and corporate our government gets.

On a related note, did you notice that the Patriot Act's clutches are still around our throats and will likely remain there? It barely got mentioned in the media today, even on Democracy NOW!'s show tonight. Yup, "roving wiretaps" and other violations of freedom will likely be extended by Mr. Constitution Scholar.

Back to Wisconsin: has there ever been a more bold-faced attempt at union-busting than Walker's little ploy? At least that's getting the press it deserves, and even President Obama said it sounded like union-busting to him.
Posted by dguzman at 5:44 PM 6 comments:

For the love of cheese! 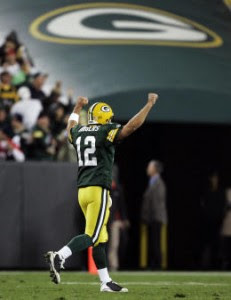 Well, as a Cowboys fan, I'm not exactly a Green Bay Packer lover, but I'm sure glad they beat the Steelers! Especially glad that Roger Staubach didn't have to hand the Steelers the trophy, although he did have to stand next to Terry Bradshaw on the dais. Did you notice how fast he got outta there?
Posted by dguzman at 7:29 PM 1 comment:

So... listening to the latest incremental back-down from power by Hosni Mubarek (I'm sure even he sees the writing on the wall), a question comes to mind.

IF -- IF we actually stay out of the Egyptian uprising and they have a free and fair election, with their own candidates who took it upon themselves to run for office....

...will this be the first time we have NOT stepped in during a power-vacuum situation to put in our own little puppet dictator? (See, oh I don't know, maybe Hussein, Saddam; Karzai, Hamed; Noriega, Manuel; Pinochet, Augusto....)

Will President Obama be able to resist the temptation? Will he continue to just stand aside and use words, not military/black-ops interference to (ahem) "influence" the outcome of any Egyptian elections? Will the Egyptians get the revolution they want?
Posted by dguzman at 5:38 PM 4 comments: