Interesting or disgusting: you decide

1. This whole Anthony Weiner weiner-pic business is pretty funny and all -- I mean, who sends sexting pics of himself in his tighty whities??? Maybe he's trolling for Jennifer Aniston?-- but what I don't understand is why the dem leadership are all calling for him to resign for his silly little panty-pics, yet repug David Vitter can buy hookers and wear diapers and somehow he still keeps his job.

The dem leadership is talking about how important it is that a congressman's constituency still respects him -- but who the hell respects Diaper-boy Vitter? But who's still kept his job through it all? 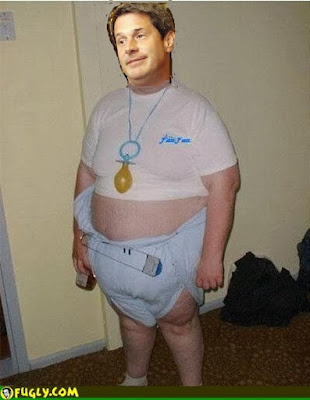 Senator Huggies 'n' Hos
More of the "it's okay if you're a republican" double standard, I guess.

2. My candidate for the most misogynist commercial of all time: the Klondike "guy listens to his wife for five whole seconds!" ad. Have you seen this? It's been all over cable TV lately, especially for some reason during all the programs I watch (Red Sox baseball, USA's series like "In Plain Sight" etc.). I'm glad to see someone at Feministing noticed it too. It's been driving me effing crazy lately. And of course the wife just talks about boring shit like visiting friends or whatever, and OH MY GOD it's so hard for the guy to listen to his WIFE. The woman he married.

How fucking stupid is he if he married someone he couldn't stand to listen to for five seconds?
Posted by dguzman at 7:42 PM 8 comments:

Put on your Mittens! 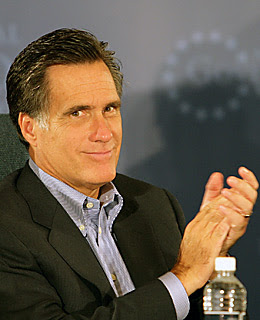 Yay for me.
It's official: Mittens Romney is STILL running for president, dammit, and PLEASE -- won't someone care? Anybody????

As NPR's Robert Smith insightfully pointed out today, Mittens never stopped running for president after losing out on the republican slot to McCan't and the moron. Mittsy's been all over New England for the last two years, eschewing his suits and ties and pretending to be a real person who gives a shit about people. Smith's report was fairly hilarious and worth listening to -- especially when he talks about how hard Mittens is trying to look like a regular guy instead of a "hedge-fund Ken Doll." Nice one.

My initial reaction to hearing Mittsy's announcement (after I laughed) is that it's kind-of pathetic when your newly crowned frontrunner is basically one of the guys who lost early last time. Tell you what: Let's examine the records of such candidates, shall we? Guys (or women?) who didn't get the nomination in one campaign but who come back and get it in a later election and go on to win the presidency. Right off the top of my head, I know where to start.

It's 1976. Gerald Ford is the republican candidate almost by default, having taken over from resignee Nixon and defeated such lame-ass challengers as Ronald Reagan for the republican nomination. Ford, however, loses the election to an upstart, Jimmy Carter.

I remember this campaign as a kid (I was in 6th grade). A friend's parents were going on and on at the dinner table about how great this Ronald Reagan was. I'd never heard of him, despite my mom's steady diet for us of old movies; I don't think my parents ever liked Reagan as an actor. They liked him less as a politician. 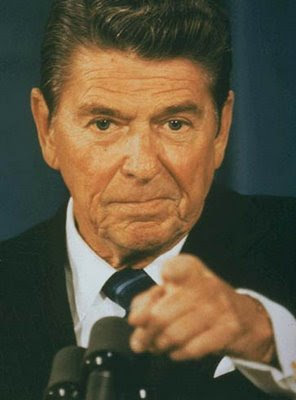 So 1980 rolls around and we get to the high point of the story: Reagan comes back after losing out to Ford in '76 and this time he not only gets the repub nomination; he wins the election over incumbent Carter.

I'm sure Mittens is looking back to this event and feeling inspired. From governor to losing candidate to president! Mittsy could be just like Saint Reagan!

Dare little Mittens hope for such a repeat of history? I looked through the other elections since then and found no one who was able to overcome losing the party's nomination and then coming back and winning the whole thing.

1984 had an interesting slate of losing dems, among them Al Gore, Howard Dean, and Joe Biden on the dem side and Bob Dole on the repub side. All tried again to become president on their own later and didn't make it. Gore came the closest, exactly 20 years after Reagan's win, but we all know what happened then.

In 2004, after losing the repub nomination to The Idiot King in 2000, McGrumps managed to get the nomination over Mike Fuckabee, our little Mittens, nobody Tim Pawlenty, and Fred "The Sloth" Thompson. Might it happen again? Might Johnny War be the next Raygun?

Um, no. Once again, an upstart wins: Obama takes the presidency and McGramps is left to wonder how he could've lost after selling out his dignity, his morals, his mother, and pretty much anything else he could get a hold of.

So we're back to 2012's campaign, and all we're hearing about is the slew of repub candidates:

What an impressible stable of candidates! Time will tell whether Mittens can pull off a Reagan and win this thing.

Question for the day

How did Mike Rowe go from QVC generic guy to "Dirty Jobs" star to being a spokesperson for trucks, jeans, and paper towels to narrating every damned series on Discovery Channel, The Science Channel, and more? I mean, how do you do a gig where you talk about your girlfriend saying your "butt looks good" in these jeans on one channel, and then on another channel you're narrating a show with real scientists and telling us about supernovae and pulsars?

How is this possible? Who is this guy's agent? What the hell is so great about him? I mean, look at this schlub: 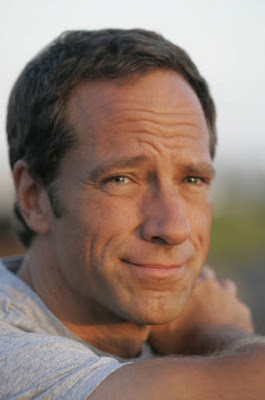 Does he really know anything about black holes?